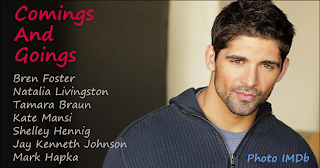 Days of our Lives has cast Bren Foster as “Quinn” a new male character.  Though there is no news yet on whom “Quinn” is set to be paired with, or his relation to any of Salem’s residents, past or current, Quinn’s first scenes, are reported to be with Nadia Bjorlin (Chloe), fuelling speculation that Chloe could be slated for a new love interest.
That news won’t be popular with Daniel and Chloe fans, or fans of Brady and Chloe, whose scenes surrounding Chloe losing custody of Parker planted seeds of a reunion for the former husband and wife couple.
Regardless who Quinn is paired with, his arrival in Salem, sometime in May, couldn’t be timelier with the departure of two high profile Salem hunks slated for later this month and early next month.  Nathan is set to leave on March 28, and his competitor for Melanie’s affections, Philip Kiriakis leaves mid April.
Bren Foster has been cast on Days of our Lives as Quinn, from a casting call for a character named “Fletcher”, who was assumed to be either a Philip Kiriakis recast, or Nicholas Alamain, given that Soaps.sheknows.com reported that Days of our Lives was bringing back that character.  Could Quinn perhaps still turn out to be Nicholas Alamain?
According to IMDb, Bren Foster was born in England and moved to Australia when he was 3, where he studied acting and appeared in Australian television.
Bren Foster – Actor and Martial Arts Master
Bren Foster’s looks are a blend of Rafe and EJ (depending on which publicity shot you look at) and his hot “bod” is courtesy of martial arts training.  He has been studying martial arts since age 6, and holds high level belts in a number of martial arts disciplines.  Bren Foster also holds a Tae Kwon Do World Champion title and has also taken out a number of Australian body building titles.
Australian viewers will be familiar with Ben Foster from his role of Alex on popular Australian soap opera, Home and Away, and his role of Lt. Cliff Bailey on Sea Patrol.  (US fans can catch episodes of Sea Patrol’s first season on Hulu.com).
Anyone that caught his performance as the Navy Reservist on board Hamersley (Sea Patrol) will be waiting for Days of our Lives writer’s to get Quinn’s shirt off.