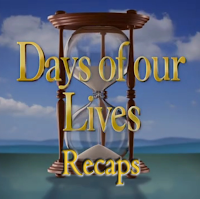 When Dario catches Fake Rafe kissing a half naked Alicia, ”the morning after” Dario calls his brother a bastard.  Fake Rafe argues with both Dario and Gabi over his treatment of Sami, his wife, and his disregard for the capture of their sister’s killer. Dario decides to stay in Salem, despite having done what he came to Salem to do (catch Ari’s killer).

Ridge and Caroline Elope | The Bold and the Beautiful

Days of our Lives: Kimberly Brady Returns to Salem