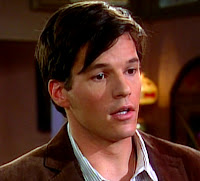 Though describing Mark Hapka’s Days of our Lives character, Dr Nathan Horton, as a longtime fan favorite is somewhat of a stretch, there are likely Melanie and Nathan fans that will be thrilled to hear that they may see the young medico and quirky redhead together yet.
Mark Hapka was let go from Days of our Lives, reportedly by the show’s writers, in January of this year, over creative differences.  If those rumors are correct we can assume that the recent changes in Days of our Lives writing line-up has made room for the actor’s return.
Nathan is set to return to Salem from Baltimore a changed man.  He is supposedly determined to win back Melanie, who he lost to Philip Kiriakis, in true star crossed lover style.
When Melanie finally left Philip after losing her and Philip’s baby, it seemed for a moment that Melanie and Nathan could have a chance at a reunion, but in a bizarre storytelling twist, Melanie decided they’d missed their time to be together, and Nathan left town a sobbing mess.
The budding relationship between Melanie and Dario Hernandez has captured some interest, but with the departure of Francisco San Martin (Dario Hernandez) that relationship is doomed to fail.
San Martin tweeted news of his departure late last week, stating that he was one of the casualties in Days of our Lives goal to bring back old characters.  Francisco San Martin also noted he would be seen onscreen until July, but that a final date has not been set.  Dario’s departure leaves few storyline threads to tie up, given that he achieved his goal of returning to Salem to find his sister, Arianna’s killer.
With Dario leaving Salem behind fans of the young couple may see a reunion between the young Horton medico and newly wealthy Kiriakis divorcee.  But an interesting story needs some conflict, either perceived or real.  What does Days of our Lives have in store for Mel and Nath?
Stay tuned for Mark Hapka’s first airdate, and storyline spoilers.UPDATE!  Soaps.com are reporting that this rumor is the result of Mark Hapka’s Facembook page being hacked and he is not returning to Days of our Lives.