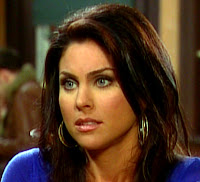 As speculated here, when it was reported that Louise Sorel’s Days of our Lives contract would not be renewed, Nadia Bjorlin (Chloe Lane) and Bren Foster (Quinn Alamain) have also been let go from Days of our Lives.

Nadia Bjorlin first appeared on Days of our Lives as Chloe Lane in 1999 as part of the last popular Salem High ensemble featuring Shawn Brady, Belle Black, and Philip Kiriakis.  Chloe Lane was introduced as the child Nancy Wesley (wife of Salem University Hospital chief of staff, Craig Wesley) gave up for adoption years earlier.  Nancy brought her daughter to Salem and the frumpy, opera singing “ghoul girl” morphed into a beauty when Philip asked her to the last blast dance.

From Associated Content:
One likely victim could be newcomer Quinn (Bren Foster), given that with Vivian’s departure he losses all ties to Salem.  Quinn was recently revealed to be Vivian’s son in a rewriting on Vivian’s backstory that has left fans puzzled.
And if Quinn goes, what happens to Chloe (Nadia Bjorlin).  So far the Quinn and Chloe story arc has contributed little other than a few gratuitous hot sexcapades, between the aesthetically advantaged duo.  Perhaps there is a happy ending for her in Chicago with Philip and Parker after all?

Despite a rocky start (Philip asked Chloe out as a bet) Philip was Chloe’s first boyfriend, but after a bout with Leukemia, she married Brady Black, Philip’s nephew, instead, and left Salem, temporarily.
Chloe returned in 2005, sans Brady, who’d become a drug addict during their time in Austria. Chloe resumed a relationship with Philip, before moving on to Lucas Horton, and then Daniel Jonas.  During her relationship with Daniel, Chloe cheated on him with Philip (she thought Daniel was cheating on her with Carly) and fell pregnant.
Uncertainty over her baby’s paternity instigated a long storyline featuring many of Days of our Lives younger set.  The revelation that Philip was Parker’s father destroyed many Salem relationships—including Chloe and Daniels.
Since, Chloe has suffered a bout of post natal depression, and after trying to kill herself by jumping in the river (leaving Parker on the pier in the cold) lost custody of Parker.  Philip though initially supportive of the mother of his child, left Salem with Parker (whom he had full custody of) for Chicago when Kate goaded Chloe into saying she would run off with Parker.
Chloe’s new love interest, Quinn Alamain videoed their lovemaking and is blackmailing the downtrodden Chloe into prostitution, an unappealing storyline twist for many.
Though Chloe Lane, and Nadia Bjorlin, will be missed, any fan of the Chloe Lane as portrayed during her early years would likely rather see the character rested and find a happy ending with Philip and Parker in Chicago off-screen, than see her be manipulated into prostitution.
I’m not sure even the best of daytimes writers could convince the Days of our Lives audience that Chloe genuinely believes prostitution is the road back to custody of Parker.
Going also is Chloe’s blackmailer, Quinn played by Australian newcomer Bren Foster.  Not so surprising given that Quinn lost his only Salem tie last week with the news that Louise Sorel’s (Vivian Alamain) contract would not be renewed.  Salem’s thirty-something bad-guy quotient is already sufficiently filled with EJ DiMera and Brady Black, given his new ruthless streak.
Presumably Quinn’s presence had been intended to give Vivian’s evil doing ways a little more muscle, but without Vivian on the Salem canvas, Quinn’s muscle, though nice to look at,  is just that.
Update:  Nadia Bjorlin’s publicist has announced that the actresses departure was at her request to pursue movie opportunities, not as part of the ongoing cast shake-ups.

Ridge and Caroline Elope | The Bold and the Beautiful