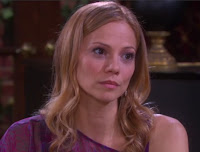 As Days of our Lives continues with is massive restructuring, news of another departure has hit.  Days of our Lives has let Tamara Braun go. She joins other Days of our Lives newcomer Bren Foster in the departure lounge, as well as longer term cast members Nadia Bjorlin (Chloe Lane), Crystal Chappell (Carly Manning) and Louise Sorel (Vivian Alamain).

The role of Taylor Walker was initially given to Natalia Livingston, who portrayed Taylor as sweet and innocent as her sister, Nicole is manipulative and conniving.  Livingston was let go after a mere six weeks onscreen in a decision to take the character of Taylor Walker in a new direction.
Tamara Braun, who already had one Days of our Lives stint under her belt as Ava Vitali , the mentally unstable woman from Steve (Patch ) Johnson’s past, was recast in the newly envisaged role of Taylor Walker.  Tamara Braun, who received a 2009 Daytime Emmy for Best Supporting Actress for her performance as Ava Vitali, first appeared as Taylor walker on April 26, 2011.
During Tamara’s short time onscreen, Taylor confessed her love for EJ DiMera, alienating her sister Nicole, who is his wife.  Last week, EJ and Taylor consummated their love at first sight relationship.
Tamara Braun is expected to be seen onscreen as Taylor Walker until sometime in September.Update:  Tamara Braun final filming date July 11, 2011.
Update:  Tamara Braun final airdate September 23, 2011