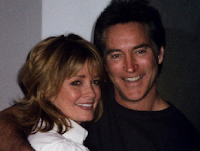 But with the initial promise that one of Salem’s favorite supercouples could only be back for a short engagement, came the next burning question – For how long are John and Marlena back?

Well, according to soaps.com there is at least half an answer.  Drake Hogestyn in an interview with soaps .com announced that he has signed a deal that will keep him in Salem, and one our TV screens for two years.  No mention has been made of Deidre Hall’s contract terms…

Hogestyn however admits that in the current soap opera climate, even with a two year contract, that could change at any time.  Hogestyn does comes across as delighted to be back at work as John Black, who he says will be more like the original John than the John that left our screens in early 2009. (Stefano had wiped John’s memory…again)
He also gives little away in the way of spoilers other than that the DiMera’s especially Stefano feature in future John and Marlena storylines.
Like other cast members and indeed the new head writers, Hogestyn is on message about revving up fans for the re-launch of Days of our Lives on September 26.