CLOSE
Soap Opera Story Soap Opera news, history, comings and goings and spoilers!
Halloween with its ghosts goblins, vampires and Lady Gaga’s (I’m sure that’s who Calliope was channeling!) is a wonderful time for any soap opera, but over the years Days of our Lives has had some exceptional Halloween episodes.  Not only do Days of our Lives fans get the joy of seeing their favorite characters dressed to the nines, but the anonymity of a costume can be a great prop for covert operations for the crime families and secret agents and police of Salem.

In 1988, Shane and Kimberly Donovan held a Halloween in their new home – Donovan Manor (which in the 90’s would become the current DiMera Mansion .  The original DiMera Mansion was the Chandler estate that Tony DiMera purchased after Kellam’s death).  Houseguest, Calliope provided their costumes, Shane and Kimberly making a dashing couple as Prince Charming and Cinderella.

But the purpose of the Halloween Party was not solely as a house warming.  Shane, investigating the identity of Benji’s father needed to make nice with Victor, so Victor was the guest on honor, despite all the bad history between him and Kimberly and Shane. 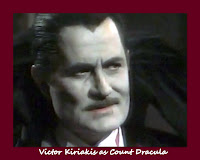 Simmon’s, Shane’s childhood butler from Donovan Manor in England (seen in 1985) also arrived in the US for this event.
The guest of honor, Victor Kiriakis was the first guest to arrive, suitably attired as Count Dracula.  Shane and Victor brokered a deal whereby Shane would provide Victor the information the ISA had on his Orient operations, for introductions.  Shane needed connections of the less than legal kind, he told Victor. 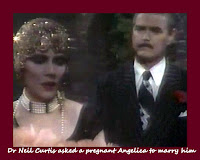 Victor also had personal business to deal with at the party.  He’d asked Angelica Devereaux, who was pregnant with Justin Kiriakis’ child, to marry him and he wanted an answer.  But Angelica’s date for the evening, Dr Neil Curtis (dressed as Al Capone) had other ideas and during the evening announced the he and Angelica were getting married. 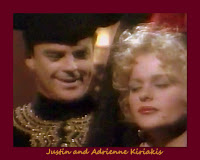 The announcement surprised everyone, including Justin and Adrienne Kiriakis who also attended the party.  The tension between Justin and Adrienne was obvious.  Adrienne tried to steal away to make a phone call, but Justin kept to his wife’s side like glue. Even when she went to the restroom!
Kayla and Steve Johnson came to the party (dressed in western attire of old).  They had recently taken in a young deaf boy, Benji, whose paternity was the central mystery on Days of our Lives at the time. 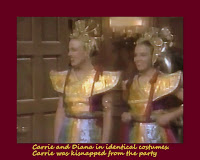 Roman Brady (John Black was believed to be Roman at the time) arrived with current flame, Diana Colville and teen daughter, Carrie dressed in identical Balinese Princess Costumes.  During the course of the evening, Diana would leave Carrie alone, and a man in a cloak would kidnap Carrie, leaving a note on the table in the foyer.
When Simmons delivered the note to Roman, the message inside read only: My Child for yours.  The message was clear.  Benji’s father wanted him back and had kidnapped Carrie to make that happen.  Roman panicked having lost Doc in the same way.  He couldn’t lose Carrie too.  Roman wanted Steve and Kayla to give up Benji to get his daughter back.  Kayla refused, putting her at serious odds with her brother.  Later that evening, Steve took Benji away, not telling Kayla where he was taking him, so that Kayla could be honest with her brother when she told him she didn’t know where Benji and Steve were. 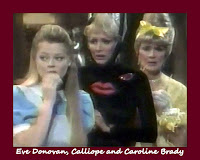 Meanwhile a mysterious man wearing a ring placed a picture of Carrie Brady in a pagoda…
And during all the commotion, Kimberly and Shane managed to sneak upstairs for a bit of hanky panky.
Now that’s a Halloween Party….