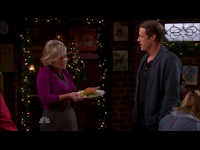 Last Friday’s episode of Days of our Lives (Friday December 16, 2011) saw Kayla Brady give Jack Devereaux a cool greeting when he entered the Brady Pub.

Kayla is back in town with son Joey (who hasn’t been seen onscreen yet) helping Caroline with the Christmas rush.  Jack came into the Brady Pub after receiving the disappointing news from Jennifer that despite Daniel breaking up with her, she hadn’t decided if she wanted to resume her relationship with Jack.

Kayla’s cool reception of Jack has prompted the question:  Does Kayla Brady hate Jack Devereaux?  And why?
Why Kayla May Hate Jack Devereaux
Kayla and Jack had a friendship (off screen) prior to Kayla coming to Salem.  The well connected son of Harper Devereaux fell for Kayla Brady years ago while in Hawaii and came to Salem looking for her.  But Kayla was already involved with rebel Steve “Patch” Johnson.
Jack was dying from Hodgkin ’s disease and Kayla was engaged as his private nurse.  Around this time Steve also began to pull back from his relationship with Kayla.  Unbeknownst to Kayla (and Jack) Steve had learned that Jack was actually Steve’s younger brother, Billy, who had been given up for adoption.
Since Jack was in love with Kayla, Steve hoped that Kayla’s love would give Jack (Billy) the will to fight his disease and live.  Steve’s plan worked and Kayla married Jack.  Jack and Kayla’s relationship remained platonic however due to his illness.
Steve and Kayla couldn’t deny their love however and began an affair.  When Jack learned of his wife’s betrayal he took what was “rightfully his” and raped her.
Jack denied raping Kayla for many years.  It wasn’t until he helped Jennifer through her rape and the subsequent rape trial (Lawrence Alamain raped Jennifer), that he faced up to what he’d done, and apologized to Kayla.
If all this history isn’t enough to justify frosty relations between Kayla and her brother in law, then perhaps Kayla is just letting Jack know that she is no more impressed with his 12 month disappearing act than the rest of his family is – held prisoner in Afghanistan or not.
Not that Jack seemed to worried about Kayla.  He ended up sitting at the bar with Austin Reed and Daniel Jonas, sinking Belgian Lagers and talking baseball…