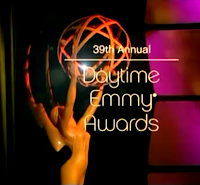 The 39th Daytime Emmy awards were awarded tonight at the Beverly Hilton in Los Angeles.  Daytime’s royalty glammed up, walked the red carpet and waited in anticipation for the winners in the Daytime Drama Series categories in tonight’s award shows.

On the red carpet we learned that Erika Slezak who played One Life to Live has been nominated for 8 Emmy awards and won 6.  A win tonight would make her daytimes most recognized actress in daytime.
Deidre Hall, accompanies by Greg Meng, both agreed that the Possession storyline on Days of our Lives was their favorite Marlena storyline.
Susan Lucci was thrilled All My Children qualified for the awards this year, given it had already left our TV screens. She announced she was coming to prime time on Lifetime in a new series – Devious Maids. Susan also demonstrative the daytime “slap”.
Finola Hughes, who recently returned to General Hospital as Anna Devane, reminisced about receiving 1000 telegrams when she won her Emmy in 1991.  She was in London when the awards were announced.
Kristian Alfonso who has played Hope Brady on Days of our Lives since 1983 commented on the recent announcement that Peter Reckell who plays her onscreen husband Bo would be leaving Days.  “I’ll believe it when I see it”  Kristian stated
During the red carpet event HLN went through the most outrageos moments in daytime which included Bo kidnapping hope from her wedding to Larry Welsh and Luke and Laura’s wedding n General Hospital, wheel of fortune solved with one letter.
The red carpet even rolled immediately into the awards ceremony where the winners would be announced.   Anderson Cooper and Oscar the Grouch got the even started…